Whether your interest in whisky is based on drinking it, collecting it, investing in it, or a combination of all three, it’s hard not to notice the runaway success of the Speyside juggernaut that is Macallan. With new releases being snapped up as soon as they’re announced and auction prices soaring, what is it that makes the distillery so successful? We’ve got an inkling that some of the expressions in our 4 March auction could hold the answer.

Epitomising the style of whisky that the Speyside region is known for, Macallan’s use of sherry casks to mature their robust, full bodied spirit results in whiskies that burst with rich dried fruits and lingering spice. We’re excited to feature not one, but two 1968 Vintage expressions from the distillery, in the form of the ubiquitous 18 Year Old and a 25 Year Old Anniversary Malt. Anyone lucky enough to have tried either of these will know exactly what all the fuss is about! Oh, and if you happen to win both bottles with a view to having a side-by-side tasting, can we tag along? 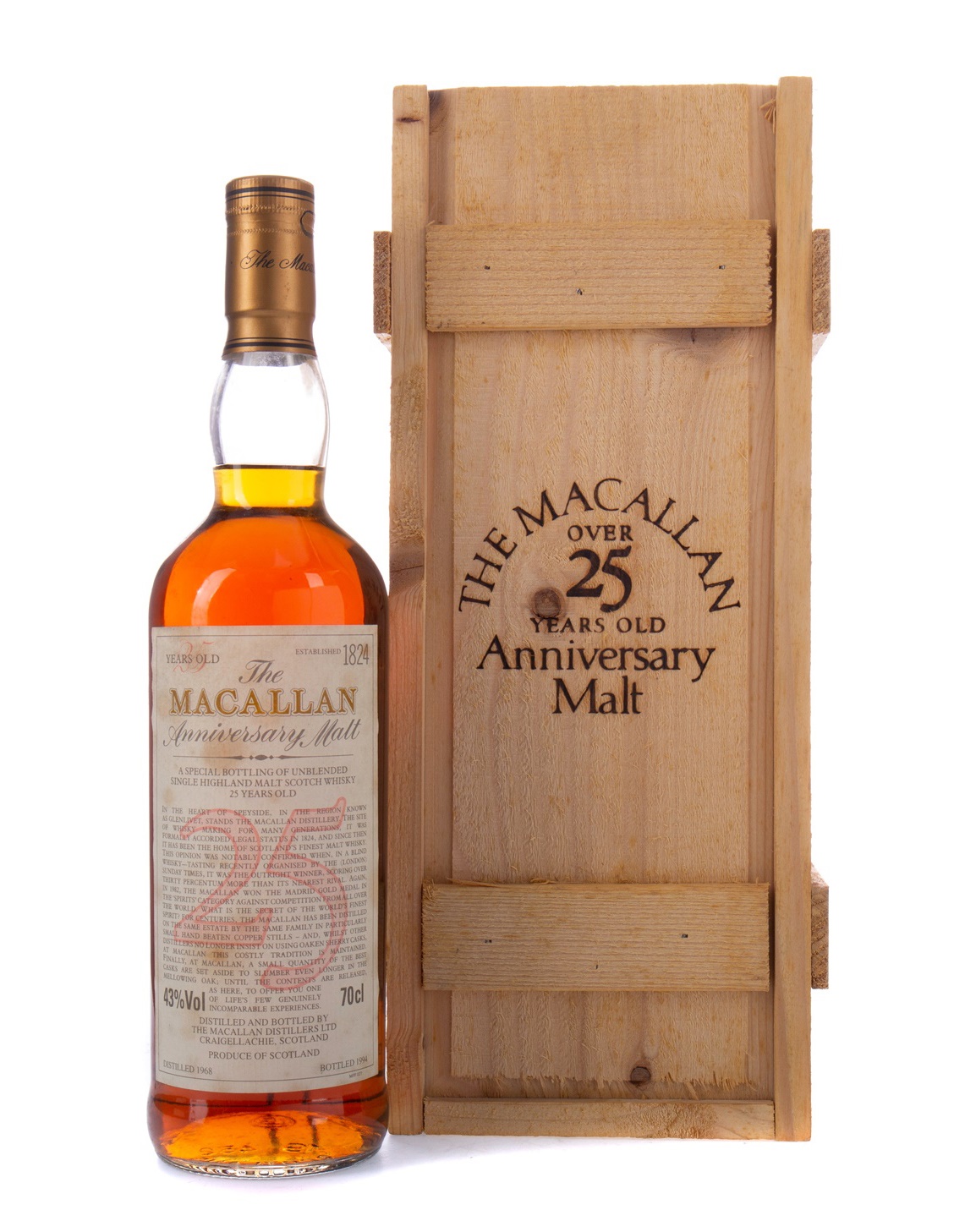 If anybody is capable of stealing Macallan’s limelight, it could well be its Orcadian sister distillery, Highland Park. The Kirkwall Vikings have produced some heavyweight drams over the years, and the 35 Year Old limited edition is right up there with the best of them. Bottled to mark the Retirement of Highland Distillers Chairman, John Goodwin, this rare, cask strength expression is a fitting tribute to the man who spent 35 years at the helm, from 1962 to 1997.

Because it tends to be single malts that generate the most buzz at auction, it’s easy to forget that blended whiskies still outsell them worldwide by around 10 to 1. The reason for this is simple; whisky blenders have mastered the art of balancing complexity with gentle approachability, whereas malts can often be challenging and polarising. One blend that enjoyed immense popularity in the mid-20th century was White Horse, whose distillery portfolio included Lagavulin and Glen Elgin. Lot 161 in the auction is a fabulous example of the blend which we estimate hails from the 1950s, and may even include a portion of whisky from the legendary Malt Mill distillery. 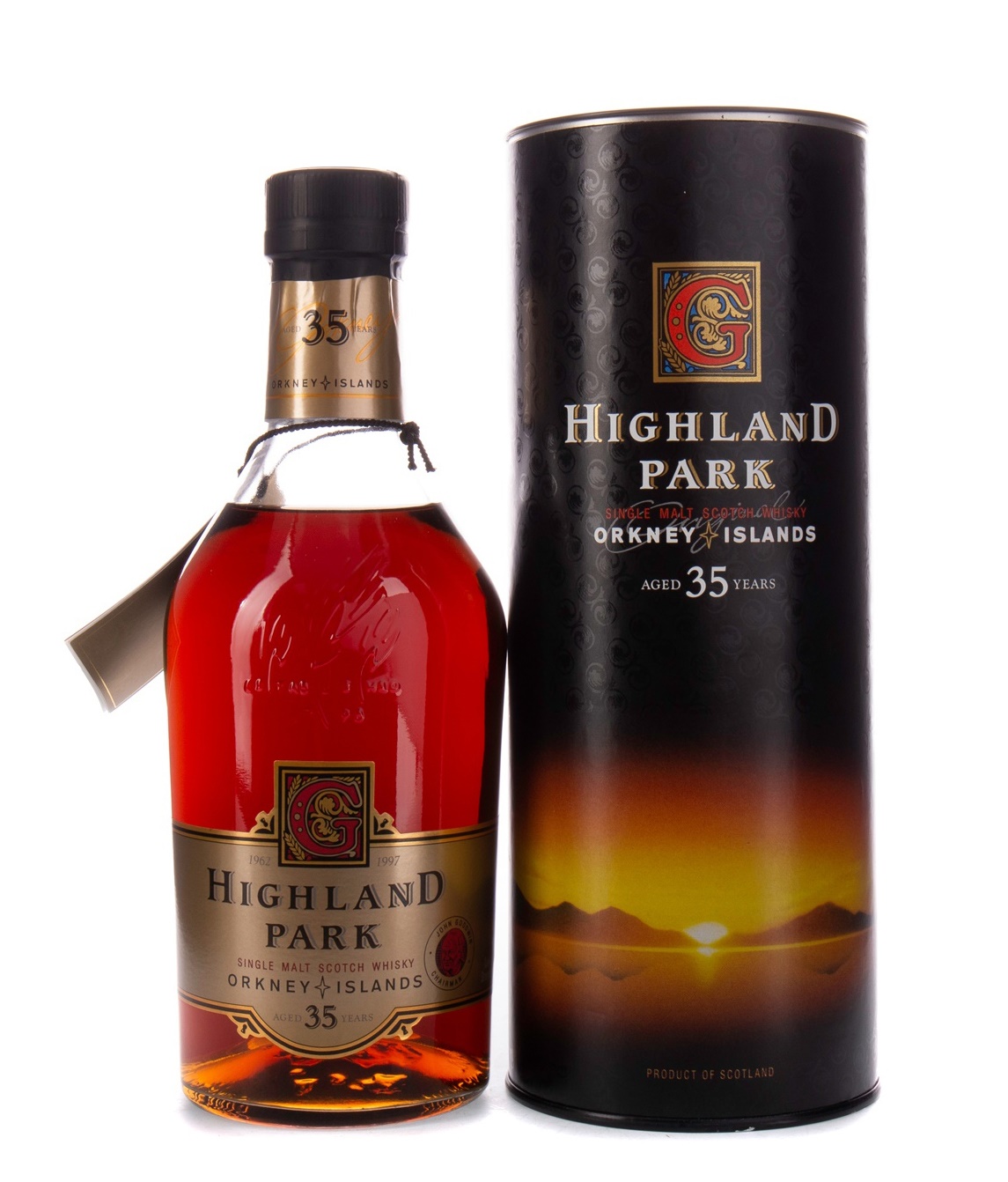 Another name that has practically become synonymous with blended whisky is Johnnie Walker. We’re proud to feature a number of rare examples from the company, including the Excelsior, containing whisky distilled in 1947, and the King George V decanter which celebrates the brand being awarded a Royal Warrant in 1934. However, it may surprise you to know that Johnnie Walker have dabbled in other areas, such as Cognac, and even Port!

One of the most intriguing bottles (metaphorically) going under the hammer this month is a miniature Douro Port, bottled by none other than John Walker & Sons of Kilmarnock. Unusual in and of itself, this mini marvel becomes even more fascinating when you notice its label makes reference to the “White Label”, a range of products that were discontinued prior to the First World War. That makes this the oldest bottle to feature in this auction by some considerable margin.

Other wine highlights include three bottles of 1945 vintage Bordeaux from one of the oldest vineyards in the Medoc region, Chateau Batailley, as well as a wonderful 1960 vintage Sauternes from the legendary Chateau d’Yquem. Known for their ability to age, in bottle, for extended periods thanks to high acidity levels which fade to reveal notes of butterscotch and caramel, old Sauternes can generate plenty of interest at auction, with an 1811 vintage Chateau d’Yquem fetching $117,000 in 2011.